Teaching new shooters is my passion and I love being able to empower women, especially, to realize that shooting can be fun and not as scary as perhaps they imagined.  Often, I have women in my classes that are nervous, scared, maybe even “encouraged” by husbands to attend.  I always tell them it’s o.k. to feel nervous and they are not “a special snowflake” because so many women feel the same way they do and so it’s perfectly normal to show up to my class with preexisting fears and trepidations.

That’s why the majority of my class is conducted in the classroom and not on the range.  I want women to feel comfortable in a relaxed environment instead of being on the range in what tends to be a more intimidating environment.  I tell them I can teach them everything they need to know about how to operate their handgun in the classroom and we only go to the range at the very end to practice everything they learned in class. 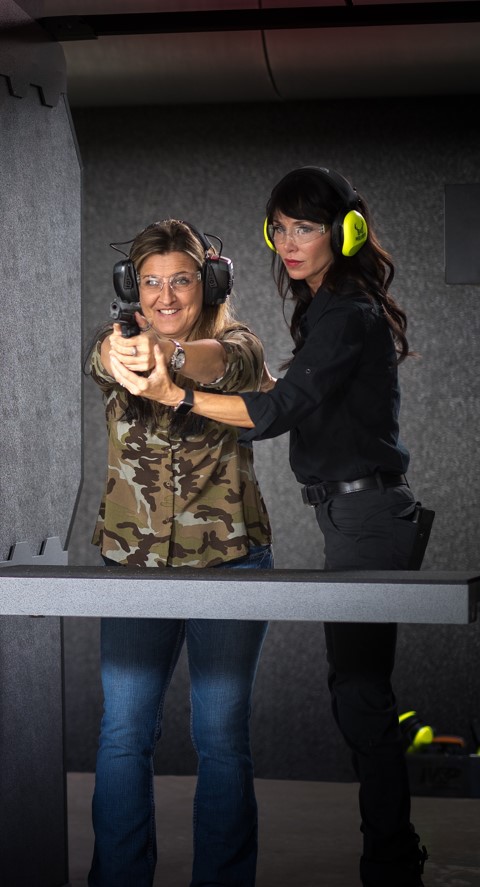 Once on the range, I have my students shoot a plain piece of paper rather than a target.  As women, we tend to be perfectionists and compare ourselves to others so I don’t want an “X” marks the spot target or anything that will distract them from simply performing the correct shooting fundamentals.  I tell them all I care about is if they hit the paper!

Now that first shot can be scary for some because of the loud bang of their gun or those of others shooting next to them.  For that reason, I have them only load ONE round into their magazine and shoot only that one round to start.  I have seen students basically drop the gun on the bench after that first shot simply from being startled and I certainly don’t want any unintentional discharges occurring so that is why we only shoot one round to start.  Once I feel confident in their ability to keep a tight grip on the gun, we start adding rounds and perhaps even get a chance to shoot real silhouette targets!

Once women have realized that shooting is actually fun, I encourage them to keep up their training and also to join my Well-Armed Woman shooting club.  That way, they have an excuse to keep coming to the range and also meet other like-minded women and develop their confidence in shooting!