The wrong “person” is on trial in Kenosha, Wisconsin. I use the term “person” because the MEDIA are the ones that largely caused this incident in the first place. When doing an investigation to determine probative CAUSE you always want to research back to see exactly what sequence of events caused this particular incident to happen in the first place.

What sequence of events led to this young man, Kyle Rittenhouse, being in Kenosha that day? It begins with the police shooting of Jacob Blake on Aug. 23, 2020. Blake was known to the responding officers to have a Felony warrant for third degree Sexual Assault, commonly called RAPE. The woman that called 911 that day was his alleged victim. Blake was armed with a knife, resisted arrest, fought with 2 officers, was tasered twice without effect, and subsequently shot by one of the officers. He was shot, while armed with a knife, after he turned back towards the officer with the knife in his hand, while attempting to enter his vehicle.

This incident was widely reported by the media as yet another shooting of an UNARMED Black Man in America. The media falsely pushed this narrative even after Police reports were made public with the facts showing a justified use of force by the Police. In fact, the media is STILL pushing this false narrative to this day.

Looting, rioting, and millions of dollars of property damage ensued. There is plenty of video evidence of the rioting. The media distortion of these events is so absurdly ridiculous that it boggles the mind.  Perhaps the most notorious example is CNN reporter Omar Jimenez standing in front of burning buildings in Kenosha doing a LIVE broadcast with the graphic  “Fiery but mostly peaceful protests after police shooting,” at the bottom of the screen.  The phrase “mostly peaceful” is now a popular term used to illustrate distorted mainstream media coverage.1 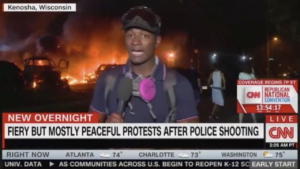 The lies and distortions have continued on into the Rittenhouse trial.  The Prosecutor is best described as a bumbling idiot.  The Prosecutor’s own witnesses have largely proven the self-defense claims of Rittenhouse, backed up by video presented as evidence in court, and Rittenhouse’s own testimony. The Judge has been unfairly accused of being biased against the Prosecutor for chastising him in the courtroom over MAJOR Constitutional blunders.  Many legal scholars have suggested the Prosecutor has purposely tried to get a mistrial declared, because he KNOWS this case is toast. The Judge has been accused of being a racist now because of a JOKE he made about lunch being late because the ports are backed up. The Judge has also been criticized by the lying mainstream media because he DARED to recognize Veterans Day in his courtroom.

The media narrative of a 17 year old white racist, illegally carrying a firearm, an out-of-towner, looking for trouble, wanting to murder someone, etc., is still prevalent amongst the viewers of main stream media. Other than being 17 years old at the time of the shooting, the rest is FALSE.  The gun never crossed state lines; it’s NOT illegal for him to carry the rifle in Wisconsin, no evidence of racism presented at trial, etc. In fact, Rittenhouse’s father lives in Kenosha, he worked there, and he was there to help protect a business. He was shown repeatedly on video, cleaning graffiti, offering medical support to others, putting out fires, running from danger, and most importantly; shooting to save his life.

Let’s take a closer look at WHO Rittenhouse shot that fateful day.

The lies, distortion, and misrepresentation by the media of rampant looting, rioting and burning across the nation are well documented for over 10 years now.

Even prior to the shooting death of Jacob Blake the Media has distorted the truth, and printed outright lies about what has really happened in many shooting incidents.

From the benefit of hindsight; evidence presented at court trials, and a plethora of video evidence, we KNOW the media has distorted the truth in MANY cases of shootings across the United States. Without going into all of the details, we KNOW the media lied about each of these shooting incidents:

The Trayvon Martin shooting on February 26, 2012

The Michael Brown shooting on August 9, 2014

The Philando Castile shooting on July 6, 2016

There are plenty more examples out there.

Ask yourself WHY are the media distorting truth like this? Who gains? What is their goal in this atrocious outright lies and propaganda? Drop me an email and let me know your thoughts.

Wallace Dunn is the President of Texas Handgun Association, a firearms and self-defense Instructor, and a retired Army Captain. While in the Army he served as a Criminal Intelligence Analyst for a major narcotics task force. He writes on matters of Armed Citizens, Self-Defense, and the Second Amendment.